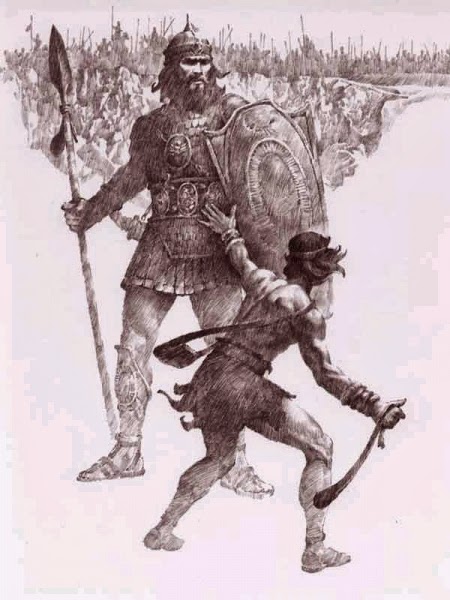 In the book of First Samuel we learn about the story of David and Goliath. Before we can look at the epic battle between a seemingly wimp and a man and a man full of himself, we must learn of what brought these two men together.( Read 1 Samuel chapters 1-15).


Saul was the king of Israel. Saul's heart was not one after God's own heart. Saul, even though gave the appearance of a Godly man, did not desire to serve God in his heart, but instead wanted to abuse his authority to serve himself. Saul rejected the word of the LORD, he was disobedient. Because of his disobedience, God dethroned Saul, even after a weak half-hearted attempt to repent. David was a man after God's own heart. Even though David did not have the outward appearance of a king, God saw that he did have the inward appearance, a surrendered heart willing to obey and  trust in the power of his God. Because of his desire to serve God with humility, God raised David to be the king of Israel. The battle between David and Goliath was an important battle, but was not the main story of the book. The main story was Saul's disobedience in God, God withdrawing himself from Saul, and joining His spirit with David because of David's authenticity.(  Read1 Samuel chapters 16-31)


The battle of David and Goliath depicted the battles between good and evil (God and devil), the flesh and spirit, mind and spirit, and self and God.  What I want to focus on is the battle between good and evil.  You and I are living in a time where right is wrong and wrong is right. We must decide who we are and where our convictions lie. Are we who we say we are, or, are we just giving lip service to give the appearance of godliness. David took his trust in God seriously. You could say he was passionate about his faith in God's authority and power. David was able to win the battle over Goliath because of his faith, his faith in the presence of God in him. By God's authority bestowed onto David, David willingly stepped up and did what the army of Israel could not do, defeat the Philistines.  David had previous experiences fighting off lions and bears in order to protect the herd of sheep under his care. David was able to see God's presence in his time of need and remembered the ability God provided him to defend of such fierce predators. David was not defeated by the threat of opposition. He stood on God's strength, allowed God to work, and responded to his calling.


David had a right relationship with God. A relationship re-enforced by tests and trials that were used by God to discipline David into a mature believer. God loved David because of his heart, a heart surrendered. Are you totally surrendered to God? How do you compare to David when faced with seemingly overwhelming circumstances? Is God with you? Are you like Saul, just giving lip service or the appearance of God's presence in your life? It will show. Does your life, or the mirror you hold, reflect the face of God or yours?

Act now wile you have time to repent. Don't let your time run out like Saul's did.