Live Out Your Faith 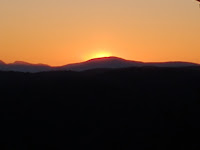 Man, I can say my faith has certainly been stretched in so many ways over the past year and a half.

Thank God for the many times in my and Jodiann's past He stretched us beyond the level of faith we had at those times. Each preparing us for the next acting as stepping stones.

A body builder isn't born with the bulging muscles of which even under clothing can be seen. It takes hard work, pouring out of sweet sand tears , years of discipline and sacrifice to get to that level of strength. Just the presence of one of such stature can command respect as if projecting an aura of strength.

Imagine the aura Abraham, Moses, David, Jesus, and the disciples projected. Is every believer to do so?

Your and my faith opportunities provide us opportunity to "build" our strength in our faith in Jesus Christ of Nazareth, stretching each beyond his own abilities. Why?

People watch and listen not only to what was said in the present but for the reward as well. If God fulfills according to His will those things that you have trusted in Him according to His will, He can do it for them. Then they step out of their boats and follow Christ in you.

The scripture doesn't depict the line of millions lined up behind Peter as he stepped off the boat. They not only see Jesus but Christ power reflecting off the others of whom each follows.

"One man of you puts to flight a thousand, since it is the Lord your God who fights for you, just as he promised you."

Does he who supplies the Spirit to you and works miracles among you do so by works of the law, or by hearing with faith— just as Abraham “believed God, and it was counted to him as righteousness”? Know then that it is those of faith who are the sons of Abraham. And the Scripture, foreseeing that God would justify the Gentiles by faith, preached the gospel beforehand to Abraham, saying, “In you shall all the nations be blessed.” So then, those who are of faith are blessed along with Abraham, the man of faith.

How many people, towns, cities, counties, states, and nations will be "launched" because of your faith?

In Him, for Him, through Him,

- July 03, 2020
"But I will leave among you A humble and lowly people, And they will take refuge in the name of the Lord" Zephaniah 3:12 NASB
Read more

- June 30, 2014
Have you ever had a time when you were challenged by your Christian faith to do the right thing? Did you do it? Why? or Why not?  Were you brave enough, if convicted to do the right thing, to do it? What was your motive? You must respond to God's commands with a submissive and humble heart, not a heart of condemnation. This does not excuse you from being just or to allow justice to prevail. It guides you to understand whose justice we are seeking. I have failed at this myself but have grown to understand the benefit of following Him. 1 John 2:3-6" 3 By this we know that we have come to know Him if we keep His commandments. 4 The one who says, " I have come to know Him." and does not keep His commandments, is a liar, and the truth is not in Him. 5 but whoever keeps His word, in him the love of God has truly been perfected. By this we know that we are in Him. 6 the one who says he abides in Him ought himself to walk in the same manner as He walked." Keep ch
Read more

Responding To The Call